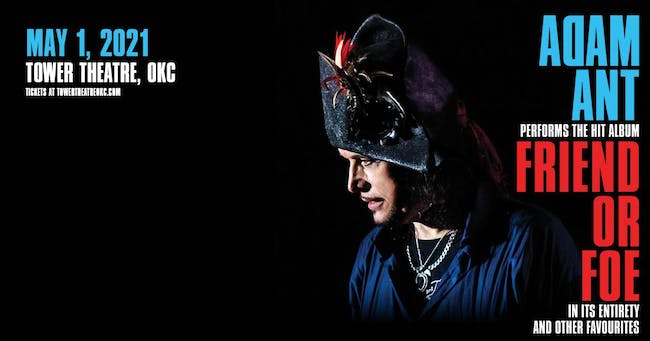 This event originally scheduled for May 1, 2021 has been postponed. A new date will be announced as soon one is decided. Please contact info@towertheatreokc.com with any questions.

**This package does NOT include a meet and greet**

Adam will be performing his hit album  Friend or Foe  in its entirety plus fan favorites!

Adam Ant will play his landmark “Friend orFoe” album in its entirety as well as classic chart-topping singles and personal favorites.The “Friend or Foe” album was Adam’s first release as a solo artist and included three hit singles. The massive hit “Goody Two Shoes” reached #1 in the UK, was also #1 in Australia and hit #6 on the USA Billboard Chart. “Friend or Foe”, the single, was another top ten hit in the UK while “Desperate But Not Serious” was the album’s third UK smash. “Friend or Foe”, his most successful solo album to date, made #5 in the UK and was certified gold album status on both sides of the Atlantic after selling over 100,000 copies.

In the USA, the album reached #16 on the Billboard album chart and turned Adam Ant into a household name, resulting in a GRAMMY nomination for Best New Artist and an MTV Award for “Sexiest Man Alive."