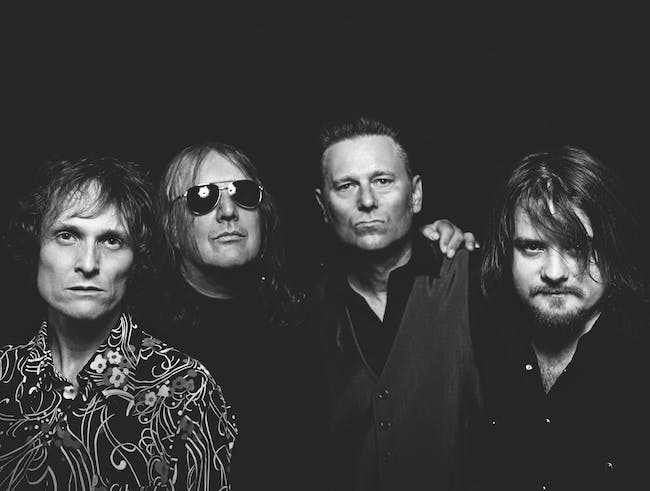 This will be an evening with Drivin N Cryin, there will be no support act. Show will begin at 8:30 PM.

Drivin' n' Cryin' didn't fit the template of a "Southern rock" band, but in a very real way they were a group that always wore the many facets of their Georgia heritage on their sleeve. Their sound was a passionate blend that encompassed the big guitars and booming drums of hard rock, the jangle of alternative rock, the acoustic sound and timeless mood of acoustic country and folk, and the literate but unpretentious lyrics of frontman and key songwriter Kevn Kinney. Drivin' n' Cryin' built their following on the rocking but roots-conscious sound of 1987's Whisper Tames the Lion and 1989's Mystery Road, but with 1991's Fly Me Courageous, they focused their hard rock influences and enjoyed a taste of mainstream success. Record company problems dogged them through much of the '90s, but after years of maintaining a low profile, in 2009 Drivin' n' Cryin' returned with The Great American Bubble Factory, a strong and focused album that consolidated their strengths, and since then the group has been touring and recording with renewed commitment.

Drivin' n' Cryin' were formed in Atlanta, Georgia in 1985 when Kevn Kinney, a vocalist, guitarist, and songwriter who had recently moved south from Milwaukee, met Tim Nielsen, who had been playing bass with a successful local band called the Night Porters. Impressed by Kinney's songs, Nielsen and Night Porters drummer Paul Lenz decided to start a new band, and adopted the name Drivin' n' Cryin' from one of Kinney's songs. The band quickly became a regular attraction at Atlanta's 688 Club, the hub of the local underground rock scene, and the club's owners were so impressed with Drivin' n' Cryin' that they launched a record label, 688 Records, to release their first album, 1986's Scarred But Smarter. The album earned plenty of airplay on college radio, and Island Records scouted the band, signing them to a recording contract and reissuing Scarred But Smarter.

Before Drivin' n' Cryin' began work on their second album, Paul Lenz left the band and Jeff Sullivan took over on drums. (Sullivan had previously played with Mr. Crowe's Garden, who would in time become the Black Crowes.) The band headed to New York City to record 1988's Whisper Tames the Lion, which was produced by Anton Fier, who filled out their sound with a handful of session musicians. The album once again scored at college radio, but Island was less than impressed with its sales, and was hesitant to commit to another album until fate forced their hand. Peter Buck of R.E.M. was a fan of Drivin' n' Cryin' and invited them to open their tour in support of the album Green. Island wanted a new Drivin' n' Cryin' album in time for the tour, and the band quickly recorded 1989's Mystery Road, which included the fan favorites "Straight to Hell" and "Honeysuckle Blue." (The album boasted another R.E.M. connection, as their guitar tech, Buren Fowler, joined Drivin' n' Cryin' as lead guitarist.) The album fared well in Georgia, where the band had become a major live attraction, but in 1990 Kinney opted to save his folk and country influences for his debut solo album, MacDougal Blues (produced by Peter Buck, who also joined Kinney for an acoustic tour), while in 1991, Drivin' n' Cryin' released Fly Me Courageous, which was dominated by the group's hard rock influences. Fly Me Courageous received more commercial airplay than anything the group had released, and MTV gave steady rotation to the videos for "Build a Fire" and "Fly Me Courageous."

Fly Me Courageous earned Drivin' n' Cryin' their first gold record, and they doubled down on their hard rock accents for the follow-up, 1993's Smoke. However, while two songs from the album made it onto the modern rock charts, "Turn It Up or Turn It Off" and the title cut, the album didn't match the previous LP's success, and reviews were not as enthusiastic. Island Records had been sold to Polygram Label Group several years before, and Drivin' n' Cryin' were increasingly unhappy with their new representatives at the company; the band and the label mutually agreed to part ways, and in 1994 Drivin' n' Cryin' signed a contract with Geffen Records. The band's Geffen debut, 1995's Wrapped in Sky, was a relatively low-key affair, with Fowler's guitar work out of the formula after he'd been replaced by keyboard player Joey Huffman. Geffen's marketing of the album was half-hearted, and the group left the label by the year's end. Huffman left Drivin' n' Cryin' and the Kinney/Nielsen/Sullivan trio cut a self-titled album (produced by former Clash associate Kosmo Vinyl) for the independent Ichiban label that arrived in 1997. The band continued to play occasional live shows, and a concert album, The Essential Live Drivin' n' Cryin', was released in 1999, with the trio joined for the shows by Huffman on keyboards and David Franklin on guitar.

The band took a break for several years, but in 2001 Kinney invited Nielsen to play on his 2001 solo album, Broken Hearts and Auto Parts, alongside guitarist Mac Carter and drummer Dave V. Johnson. The foursome clicked, and they mapped out plans for a new Drivin' n' Cryin' album; the LP wasn't completed, but an EP, Detroit City Rock, came out in 2002, and the new edition of the group began playing out regularly. In 2007, Kinney had surgery after nodes were discovered on his vocal cords; he quickly regained his voice, and he began blocking out plans for a Drivin' n' Cryin' album. The Great American Bubble Factory was released in 2009, and the band hit the road, playing more shows that year than they had in ten years. In 2011, Mac Carter dropped out of Drivin' n' Cryin', and Sadler Vaden came on board as their new lead guitarist. Instead of cutting a new album, the band decided to release a series of four EPs -- 2012's Songs from the Laundromat, 2012's Songs About Cars, Space, and the Ramones, 2013's Songs for the Turntable, and 2013's Songs from the Psychedelic Time Clock. A documentary about the group, Scarred But Smarter: Life n' Times of Drivin' n' Cryin', was also premiered in 2012, and in 2015 they were inducted into the Georgia Music Hall of Fame. In 2018, Drivin' n' Cryin' partnered with New West Records for a remastered reissue of their 1997 album for Ichiban, given a new package and a new title, Too Late to Turn Back Now. They put the tough hard rock side of their musical personality front and center on 2019's Live the Love Beautiful, which was produced by Aaron Lee Tasjan, who had previously played guitar with the group. By this time, the Drivin' n' Cryin' lineup featured Laur Joamets on guitar along side Kinney, Nielsen, and Johnson. ~ Mark Deming, Rovi