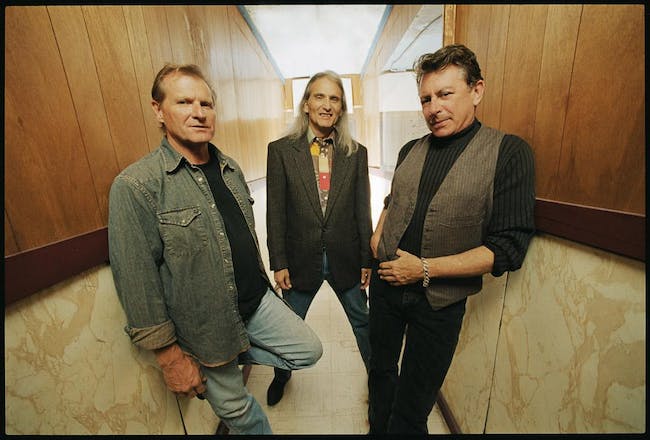 The fact that Texas music titans Joe Ely, Jimmie Dale Gilmore and Butch Hancock -- on their first go-round as The Flatlanders in 1972 -- were completely rejected by the country music establishment is surprising in retrospect but, ultimately, poetic. That each went on to have formidable solo careers is a testament to their talent and determination. Add to this their diverse yet complimentary styles -- Joe the street-wise rocker, Jimmie Dale the mystic with the classic country voice and Butch the cerebral folk singer -- and you've got a story of one of the most extraordinary kinships in American musical history.

It took these Flatlanders a mere three decades to release the sequel to their legendary debut. So the swift arrival of the group's latest New West album Wheels of Fortune -- which comes hard on the heels of 2002's widely acclaimed Now Again -- is a delightful and very welcome surprise. The fourteen songs that make up Wheels Of Fortune are absolute wonders of songcraft, sung by three of the most authentic voices in music today.

Joe, Jimmie and Butch initially reunited as The Flatlanders in 1998 to do a one-off recording, at the behest of Robert Redford's people, for the soundtrack of The Horse Whisperer. It was so much fun, the trio regrouped and cut an entire album. The result, Now Again, was unanimously received as a triumph. Mojo magazine dubbed them a "country Beatles." Rolling Stone gave it 3 and 1/2 stars. The Washington Post said, "Given the jaw-dropping quality of the disc, three decades almost seems a reasonable wait." Billboard raved, "An event record that lives up to all expectations." Now Again spent 17 weeks at #1 on the Americana charts and 21 weeks on the Billboard Country charts.

It was only a matter of weeks after the band had completed an 80-date U.S. and European tour when they re-entered the studio. "Once you get somebody on stage, it's kind of hard to get 'em off," Hancock says with a laugh. "Once we got a roll going, it felt good to keep working on something."

"We didn't want to go another 30 years before we made a record," Ely says. "After our last date of the tour, we were talking about it on the bus. We said, 'Well, ought to just get together while the band is hot and fresh and record. Not even think about it.' Basically, that's what we did. We didn't plan it or anything. We just sat down and started recording songs that we'd like to hear on tape. That's what this record is."

In March 2003, the Flatlanders and their band -- Robbie Gjersoe (guitars, banjo, vocals), Steve Wesson (musical saw), Tony Pearson (vocals), Gary Herman (bass), and Chris Searles (drums) -- convened at Joe Ely's Austin studio, with Ely again producing. Guests included steel guitarist (and noted producer) Lloyd Maines, guitarist Mitch Watkins, and accordionist Joel Guzman. The Flatlanders ended up cutting more than 30 songs, 14 of which appear on Wheels of Fortune. Some of the tunes are brand new while others have been kicking around in the individual repertoires of Ely, Gilmore, and Hancock for some time.

Hancock reflects, "We came together as a bunch of friends who happened to be musicians, too. There's just that crazy Lubbock mystery to it. We've all had our focus on the quality of the songs and the music, instead of any kind of 'me first' thing, or any kind of ego trips. It's almost like the old Marx Brothers thing: Three guys get to the door at the same time, and they all say, 'Oh, no, you go first.' 'No, you go first.' 'No, please, please, you go first.'"

Ely adds, "We've always been close, but now I think that we all realize that this is something that is really special. There are very few people who have remained as close as we have, especially in the music world. There are cases out there where brothers won't even talk to each other because they've been in the music business together. We consider this a real precious thing."

"For it to still be as much fun as it was in the beginning, I feel blessed," says Gilmore. "A lot of musicians don't get that luxury."