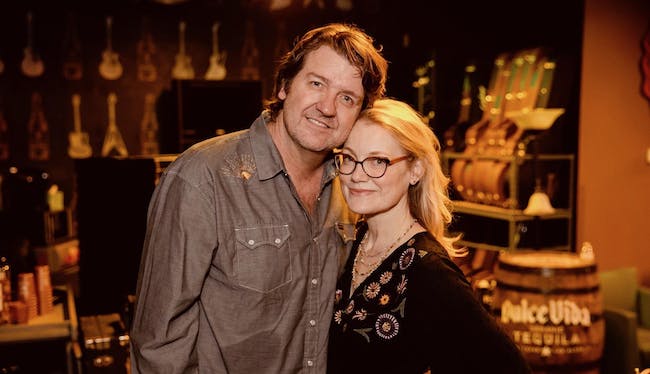 If Austin’s happily egalitarian music scene suddenly switched to a monarchy, Bruce Robison and Kelly Willis might have to learn to perform while balancing hefty crowns. The two already reign as one of Americana music’s coolest couples, and their latest release, Our Year, elevates them closer to the lofty territory once occupied by beloved royals Johnny ’n’ June and George ’n’ Tammy.

Not that they would ever seek royal treatment, of course. This duo is way too down-to-earth for Downton Abbeyairs. They’re Texans, after all. Robison is a Bandera boy; Oklahoma-born Willis an Army brat, got here as soon as she could. They fell in love while harmonizing together, though it took them until 2013 to release their first officially billed joint effort (not counting four children): Cheater’s Game.

Cheaters Game was very well received and Willis and Robison felt the wind at their backs. They were eager to return to the studio. “With this album, we feel like we’re completing the picture,” Willis says. “These songs have been poking us on the shoulder, dying to be heard. We just didn’t feel like we were done. We had more to say.”

Working again in Nashville with producer Brad Jones, they delivered their musical thoughts in 10 outstanding tracks, from formidable originals to well-honed covers including a knockout version of the Tom T. Hall-penned “Harper Valley PTA.” Jeannie C. Riley’s 1968 hit sounds like a classic all over again in the hands of this pair — and the chicken-pickin’, mandolin-plucking, shaker-grooving players who back them on this tart tale.

On their shared website, Willis describes how she learned the song in secret in order to zing her hubby for veering off the set list during one of their shared performances, dubbed “The Bruce and Kelly Show.” It went over so well, they not only added it to their set, they made it the album’s leadoff single.

Competitive streaks aside, their harmonies align perfectly on such excellently chosen melodies as the country-rocker “Motor City Man,” by the late Walter Hyatt; T Bone Burnett’s “Shake Yourself Loose,” a beautifully melancholy duet; “I’ll Go To My Grave Loving You,” a fiddle-sweetened Statler Brothers hit; and “(Just Enough to Keep Me) Hanging On,” the Ira Allen/Buddy Mize-penned nugget Vern Gosdin recorded with Emmylou Harris.

Willis and Robison also chose “Departing Louisiana,” by Robyn Ludwick, the youngest of three Robison singer-songwriter siblings. (“It’s about time we all started raiding her material,” brother Bruce says.) Darden Smith and Robison co-wrote the waltz-time “Carousel,” which he describes as “a classic country weeper.” Monte Warden collaborated with Robison on the bittersweet ode to youthful innocence, “Anywhere But Here,” which Willis describes as “classic Bruce poetry.” She penned the bluesy honky-tonker “Lonely for You” with Paul Kennerley; and they plucked the album’s title track, a Zombies song, from their annual Christmas show.

“I love the fresh-start, hopeful-promise aspect of this song and the nod to struggles that have been overcome,” Willis says of the Chris White-penned tune, which features banjo, steel and dobro backing by Nashville session ace Pete Finney and Austin’s own Geoff Queen.

She’s not shy about admitting some of those struggles are attributable to married life and parenthood, especially when balanced between two musicians with their own careers. Hers began at 17, when she joined her then-boyfriend’s rockabilly band. They moved from Virginia to Austin, where her heartache-meets-honky-tonk voice lured MCA Records’ Tony Brown into signing her. The label positioned her as a country ingénue, a role she played in the Tim Robbins film “Bob Roberts,” but she sought a different path and they parted ways. Willis finally achieved widespread recognition with 1999’s What I Deserve.

By then, she had met and married Robison, who has become one of country and Americana’s most respected songwriters. His compositions have become massive hits for George Strait “Desperately”), Tim McGraw (“Angry All the Time”) and the Dixie Chicks (“Travelin’ Soldier”). He also has recorded on his own and collaborated with brother Charlie and others as a songwriter, singer, guitarist and harmonica player and producer/engineer.

“Kelly has been singing [with me] since the first recording I made,” Robison says, “and she was the first person who ever recorded one of my songs. We’ve never stopped collaborating.”

The difference now is that they’re not assisting one another; they’re full partners.

“It’s not one of us running the show. It’s the two of us figuring out how to play together,” Willis explains. And that creates a different vibe, especially live. “I almost never worry when I’m onstage with Bruce because I know he’s got my back,” she adds. “If something goes wrong, he can completely take the reins.”

The desire to capture that live dynamic — their “swampier, grittier side” — drove the creation of Our Year,Willis says. Robison calls their style “a modern take on classic country music, without being retro.”

“I really feel like we came up with a sound, the way that the vocals blend together, and it rejuvenated me as an artist and a performer, which I really needed after 20 years,” he admits. “There’s a lot of great duos, and I love that. That close-harmony singing, it’s real organic; it’s a really lovely thing.”

“I have to say, I think that Kelly’s voice is just a gift. She’s one of the greatest singers there is out there.”

Clearly, mutual respect is a major part of their glue as a couple, but making these albums has brought them closer, Willis says, adding, “Having these records that we both love is a really positive product of us being together.”