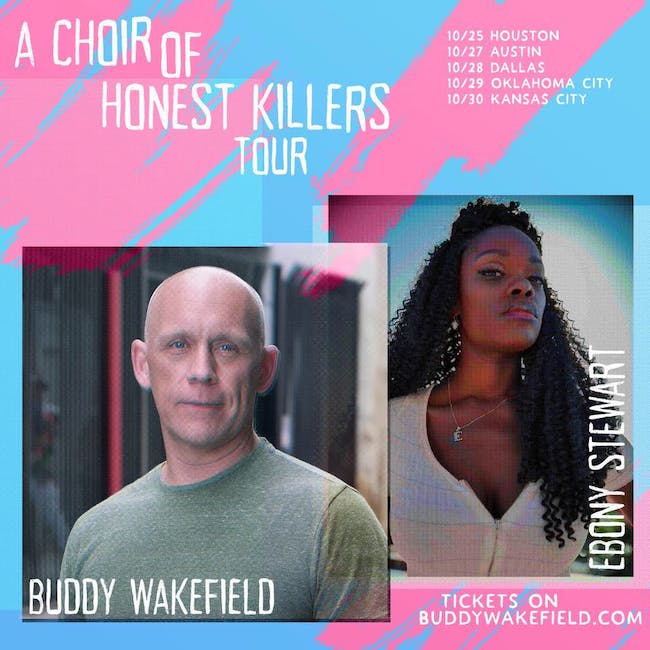 BUDDY WAKEFIELD is a three-time world champion spoken word artist featured on the BBC, HBO’s Def Poetry Jam, ABC Radio National and has been signed to both Sage Francis’ Strange Famous Records as well as Ani DiFranco’s Righteous Babe Records. In 2004 he won the Individual World Poetry Slam Finals thanks to the support of anthropologist and producer Norman Lear then went on to share the stage with nearly every notable performance poet in the world in over 2000 venues internationally from The Great Lawn of Central Park, Zimbabwe’s Shoko Festival and Scotland’s Oran Mor to San Quentin State Penitentiary, House of Blues New Orleans and The Basement in Sydney, Australia.

In the spring of 2001 Buddy left his position as the executive assistant at a biomedical firm in Gig Harbor, WA, sold or gave away everything he owned, moved to the small town of Honda Civic and set out to live for a living, touring North American poetry venues through 2003. He has not yet stopped.

The first author released on Write Bloody Publishing and an original Board of Directors member with Youth Speaks Seattle, Buddy is published internationally in dozens of books with work used to win multiple national collegiate debate and forensics competitions.

Having spent most of his career based in Seattle, WA, Buddy has been a busker in Amsterdam, a street vendor in Spain, a team leader in Singapore, a re-delivery boy, a candy maker, a street sweeper, a bartender, a maid, a construction worker, a bull rider, a notably slow triathlete, a facilitator at Quantum Learning Network, and is the most toured performance poet in history.

Wakefield, who is not concerned with what poetry is or is not, delivers raw, rounded, disarming performances of humor and heart. He is now based out of Los Angeles, CA where he lives as a free agent pursuing acting and screenwriting for both television and film.

Ebony Stewart is an international touring poet and performance artist. Her work speaks to the black experience, with emphasis on gender, sexuality, womanhood, and race, with the hopes to be relatable, remove shame, heal minds, encourage dialogue, and inspire folks in marginalized communities. As one of the most decorated poets in Texas, Ebony is a respected coach and mentor, one of the top touring poets in the country, and a Women of the World Poetry Slam Champion. The Sexual Health activist and former Sex Educator is also pursuing a license as a Sex Therapist. As a playwright, Ebony’s one woman shows, Hunger and OCEAN have received B. Iden Payne Awards and the David Mark Cohen New Play Award. She is the author of Love Letters to Balled Fists and Home.Girl.Hood. Her work has been featured in For Harriet, AfroPunk, Teen Vogue, and The Texas Observer. The only poet to perform at the Seattle 2018 Pride Festival before 200,000 people, was Ebony Stewart. She is the #storyoftheblackgirlwinning