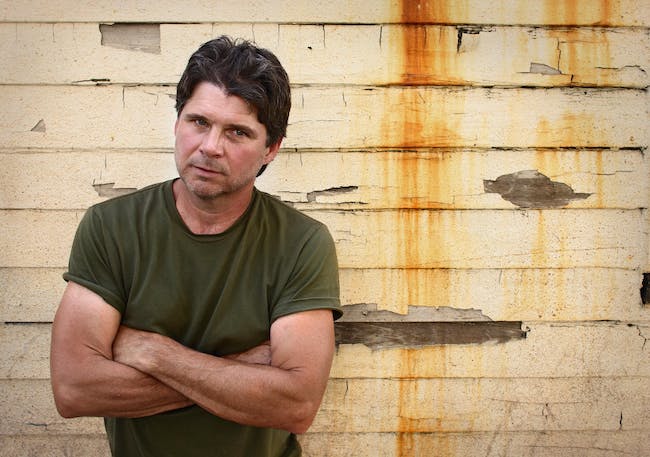 Ten years and five acclaimed albums into one of the most uncompromising careers in American music, the singer/songwriter whose work has been compared to Prine, Cash andNebraska-era Springsteen by some the toughest music writers in America may have finally conquered his most demanding critic of all:himself. “Right now, this is my favorite record,” Chris Knight says of his new album, Heart Of Stone. “It might just be my best. For some reason, there’s a cohesiveness here that’s not like anything I’ve done before. But at the same time, it’s not real predictable. There’s a lot of texture to it as well, but it’s a simple record. I don’t know how that happened. But I know it when I hear it.” Then again, Knight has always been an artist of fierce instinct and uncommon paradox. A former strip-mine reclamation inspector, Knight still lives in the rural coal town of Slaughters, Kentucky (population 200) where he was born and raised. But it’s been on record – as well as everywhere from rowdy Texas roadhouses to hushed New York City theaters – where Chris has forged the reputation for a stark and often-ferocious honesty that led one writer to call his music “where Cormac McCarthy meets Copperhead Road.”

“I still don’t know what to call myself,” says Chris. “When people ask me what kind of music I play, I tell ‘em my music is country and rock and folk and roots rock and even pop. I think this album sounds that way, too.” Produced by Dan Baird (of Georgia Satellites fame, as well as producer of Knight’s widely-praised A Pretty Good Guy and The Jealous Kind discs), the 12 songs on Heart Of Stone represent a creative maturity unlike anything Knight has done before. The music itself is a richly organic sonic mosaic where snarling guitars and pounding drums live alongside mournful violas, plucky banjos, B-3 organ and even the occasional trombone and bouzouki. And for an artist known for his narratives about busted lives and broken dreams, Knight’s new songs now carry a hard-fought wisdom that gives his characters deeper seams of pain, pride and ultimately, hope. “I’m conscious that I know a lot more than I did 7 or 8 years ago,” Chris says. “Lately I’ve been writing about more internalized thoughts and situations, about what I feel rather than maybe tell a story. I can’t keep playing the same thing or telling the same stories in different ways. Getting comfortable with what you do is a big part of it, I guess. I wasn’t afraid to say what I think, play what I play, or put what I want on this record.”

“These are the songs of a grown man,” says producer Dan Baird, “and it’s not just the lower body count. Chris is much more comfortable with his voice, his writing and the recording process than he’s ever been before. He wanted to make a really lowdown record, kind of like a rock band playing these really rural songs. And I wanted to try anything to get as much of who Chris is now on the record as possible.” Baird, who co-wrote 4 of the album’s songs, took a wholly organic approach to letting Knight and the musicians find the songs in the studio. “We set up a small drum kit, 2 amps and a little p.a. in one corner for Chris and the band to flesh-out the songs together. So rather than do a chart, put on headphones and make a mess of it while we tried to figure out why Chris wanted to kick every ass in the room, we all tried different stuff until we found the feel he was looking for. It was kind of a Blind Man’s Bluff and Easter Egg Hunt rolled into one sometimes, but when we got it right we’d jump to our positions and record it. We knew it when we heard it.”

The unpredictable power and texture of Heart Of Stone makes itself clear with “Homesick Gypsy,” the potent opening track driven by parade drums, slide guitar, trombone, banjo and bouzouki. “Hell Ain’t Half Full” is a razor-edged rocker with an unflinchingly fierce moral core. “Almost There” is a sinister snarl of hard-luck, while “Another Dollar” explodes with vicious guitars and Chris’ surprisingly howling vocals. There’s a mournful strength to “Danville”, hardcore regret in “Miles To Memphis” and a coming-out-of-the dark joy to “Maria”. He delivers both sides of love-gone-wrong with the unexpected optimism of “Something To Keep Me Going” and the haunting pain of “My Old Cars”. Knight is at the peak of his storytelling power with “Crooked Road”, an elderly miner’s heartbreaking elegy to “good dreams gone cold” filled with love, loss, doubt and faith. But it’s the album’s title track that may be most unforeseen tale of all, in which broken promises and a broken home cannot break a struggling man’s resolve.

And while the album’s closer “Go On Home” may seem like a taciturn mission statement, Chris’s plainspoken standpoint is tempered with tenacity, acceptance and a defiant wisdom. “They’re all pretty hard-nosed songs,” Chris admits. “But it’s as unified as collection as I’ve ever recorded. People may not always agree with the attitude of my music, but my point of view has always been pretty clear. With this album, it’s probably more visible. I want to be able to stand on stage singing these songs and have people believe that what I’m saying is the way that I feel.”

For fans, critics and even Knight himself, this record is the one where it all comes together. It’s an album that is alternately raw and rocking, quietly powerful and significantly truthful in its scope. Most of all, Heart Of Stone is the sound of a remarkable artist coming into his own.

You’ll know it when you hear it.