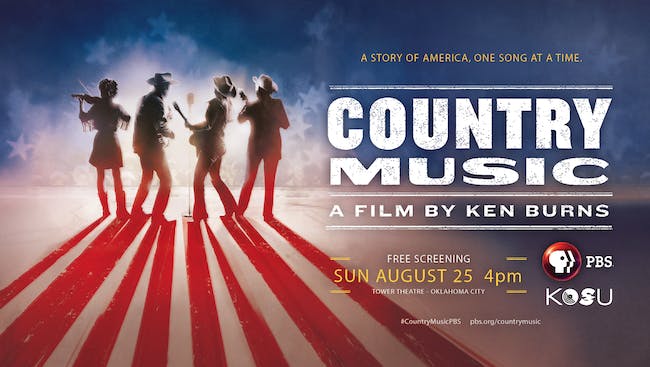 This screening is free to the public (with ticket) and available to projector club members.

About the Projector Club

We're proud to announce the debut of THE PROJECTOR CLUB, a local film subscription unlike any other. For just $10/month, you'll receive unlimited access to ALL Tower screenings. PROJECTOR CLUB members also get exclusive discounts at the bar and quarterly surprise perks! Don't miss a moment at OKC's original home for the movies! Help preserve OKC's rich history of film - join the Projector Club today for just $10/month.

KOSU hosts a screening of Ken Burns new documentary, Country Music, ahead of its premiere on PBS stations. This screening will provide an overview of the entire Country Music series, with a series of segments featuring stories about Hank Williams, Patsy Cline, Loretta Lynn, Vince Gill, Garth Brooks and more.

Country Music is an eight-part, 16-hour documentary series directed and produced by Ken Burns, that explores the history of a uniquely American art form. From its deep and tangled roots in ballads, blues and hymns performed in small settings, to its worldwide popularity, learn how country music evolved over the course of the 20th century, as it eventually emerged to become America’s music.

Country Music explores questions such as “What is country music?” and “Where did it come from?“ while focusing on the biographies of the fascinating characters who created and shaped it. From the Carter Family, Jimmie Rodgers and Bob Wills to Hank Williams, Patsy Cline, Johnny Cash, Merle Haggard, Loretta Lynn, Charley Pride, Willie Nelson, Dolly Parton, Emmylou Harris, Garth Brooks and many more, the documentary will explore stories as well as the times in which they lived. Much like the music itself, the series tells unforgettable stories of hardships and joys shared by everyday people.

Country Music premieres on Sunday, September 15 at 7 p.m. CST on PBS stations across the country.