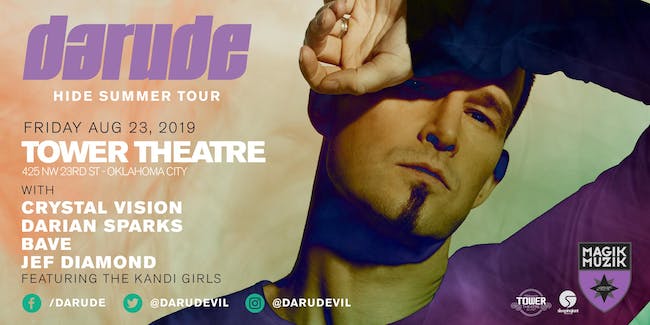 To date Darude remains one of dance music’s most influential stars. At the age of 24 and at the height of the trance boom of the early 00’s Finnish DJ / artist / producer Ville Virtanen created the milestone single ‘Sandstorm’ under his pseudonym Darude. The track went on to become one of the biggest selling dance singles in the history of electronic dance music with global sales of over 3 million units and to date featuring on over 300 compilations worldwide.

What started out as a national release in Darude’s native home of Finland went on to become a worldwide phenomenon taking ‘Sandstorm’ to #1 on the Finnish Dance Chart; a spot that it would dominate for 17 weeks. Released in June 2000 by Neo Records the track would see Darude became the first Finnish artist to reach the Top 3 positions on the UK singles chart. Following this, ’Sandstorm’ went on to go Platinum and become the ‘World’s best selling 12” vinyl’ of 2000. The track attained cult like status and gained strong support from industry heavyweights such as Radio 1’s Pete Tong, Tiësto and Paul van Dyk, as well receiving phenomenal radio support from national stations in over 70 countries. Still swelling in sales today ‘Sandstorm’ achieved Gold status in digital sales in the US in 2010 and re-entered the UK Top 40 Dance Chart in 2011, whilst finding new supporters in the likes of Calvin Harris, Zane Lowe and Laidback Luke.

The success of his first three singles (‘Sandstorm’, ‘Out of Control’ and ‘Feel the Beat’) led to the release of Darude’s debut artist album, ‘Before the Storm’. The album would go on to go double Platinum in Finland and Gold in Canada. Worldwide sales to date are over 1 million units. The album was supported by a gruelling 9 month worldwide tour taking in Europe, Australasia and Asia. In the spring of 2002 he followed up this world tour by embarking on a 7 week live show tour across North America – a daring project but one that paid off, solidifying his name throughout the North America club scene.

In 2003 Darude released his 2nd artist album ‘Rush’. The first two singles from the album titled ‘Music’ and ‘Next to You’ went on to conquer the #1 position on various charts across Europe. In 2006, after several years on the road, Darude went back into the studio to work on his 3rd artist album, aptly titled, ‘Label This!’. Released in the fall of 2007 in Scandinavia, fall 2008 in USA and then globally in spring 2009, the album was a melting pot of the modern sound of Darude; progressive euphoric trance, fusing elements of house and rock.

With appearances globally across radio and TV, the sound of Darude has also been featured in Hollywood movies such as ‘Under The Skin’ featuring Scarlett Johansson, ‘Ballistic’, ‘Filth’, ‘Like Mike’ and the Jim Carey hit film ‘Fun With Dick and Jane’, Nike, Playstation games and popular sports broadcasts like the America’s NFL, Ice Hockey World Championships, Wimbledon, Ultimate Fighting Championship (used by former heavyweight champion Wanderlei Silva), Euro 2000 and 2006 Winter Olympics. In 2010 his seminal single ‘Sandstorm’ found itself included in the globally popular computer game series DJ Hero, alongside other iconic club tracks such as Josh Wink’s ‘Higher State of Consciousness’.

Hailed by the likes of DJ Magazine as “Finland’s biggest musical export”, Darude has gone on to perform in front of audiences up to 100,000 people strong, sweeping across continents and rocking clubs the world over. From appearing at prestigious festivals and events such as Tomorrowland (Belgium), LA Music Festival (US), Radio 1's One Big Sunday (UK), Utopia Music (Australia), Laserpoint (Finland), Groove Cruise (US) to headlining some of the world’s best clubs including Ministry of Sound (London), Spundae (Hollywood), Rain (Las Vegas) and Government (Toronto).

December 2010 saw Darude and, co-owner Randy Boyer announce the inception of their new electronic dance music label, EnMass Music. To be used as a platform for their own material, Darude and Randy also wanted to use the imprint as a channel to nurture new music from other emerging artists of whom they believe in musically. To date the label has amassed support from named spinners such as Markus Schulz, Gareth Emery and Judge Jules.

Since the launch of the label Darude has unveiled new compilation series – Salmiakki Sessions. The first release in the series was back in 2011 and is a solid reflection of his namesake radio mix show 'Salmiakki Sessions' which has been broadcasting bi-weekly to fans around the globe since 2005. More recently he has been working on completing his 4th artist album with a view to a release date in 2015. This new project will see Darude deliver an album of both song-led and club focused records, including the emotive and trancey sounds he’s become so synonymous with. The first single from the album will be ‘Beautiful Alien’ due early 2015.

So 15 years on from ‘Sandstorm’ and with three artist albums, one compilation, numerous awards and multiple world tours under his belt, as well as a sizzling record label to focus on, Darude’s presence in the world of electronic music remains an ever prolific one, which continually sees him pushing the boundaries and igniting audiences around the globe.