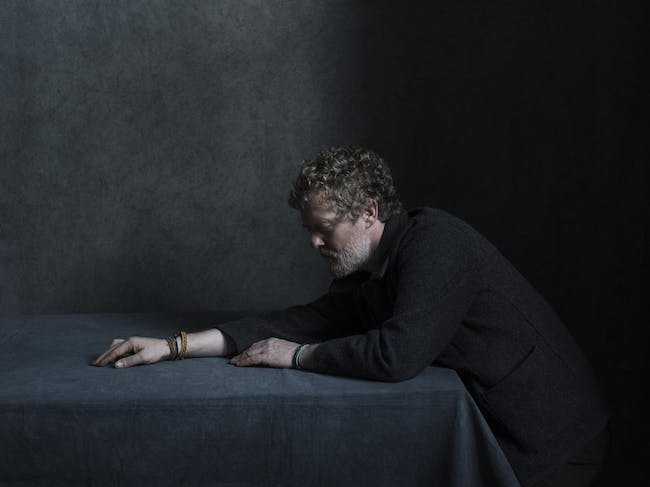 iCal
Google
Glen Hansard, the Oscar Award Winning artist from the film, "Once,” performs live at Tower Theatre in Oklahoma City on September 16.

Glen Hansard is proud to partner with PLUS1 so that $1 from every ticket sold will go towards safegaurding people experiencing homelessness and ending the cycle of homelessness and poverty. www.plus1.org

It is July 2017, and Glen Hansard is sick and wandering the streets of Paris. It's been a long spell on the road. Barely two weeks have passed since he wrapped up a support tour for Pearl Jam front man Eddie Vedder, and more than five years have gone by since there was a month when he wasn't on stage. Not to mention the albums: Rhythm and Repose (2012), the Grammy-nominated Didn't He Ramble (2015), and a soon to be released Between Two Shores (2018); a bevy of EPs; and to top it off, a five week "Camino by sea" in a traditional Irish naomhóg, a journey which was captured on film and released as the full-length The Camino Voyage (2018).

He has earned both his exhaustion and now his respite: a month in one place. Taking a residency at the Centre Culturel Irlandais, Hansard has come to France to put shape to a new album. The intention is to create "an acoustic record with sparse accompaniment" in concert with long-time friends and collaborators Joe Doyle (bass), ROMY (piano, string arrangements, and vocals), and Javier Mas (Spanish guitar, laúd).

Paris, however, has other plans. One night at dinner, friend, author, and classical singer Judith Mok introduces Hansard to the Khoshravesh brothers, who studied classical and traditional music in their native Iran before relocating to Paris. The simple meal quickly turns into a session. Hansard recalls working through one song particularly. "The Khoshravesh brothers joined me and I was transported. The song took on a new depth: I heard it differently, and new possibilities emerged. The ease by which they followed their own melodic line while being sympathetic to mine was intoxicating." By the end of the night, the brothers agreed to join Hansard in Black Box studios, where he will be working with producer David Odlum, and what was to be a straightforward album begins to take an interesting turn.

The roster of musicians quickly increases. Along with Joe Doyle, Romy, and the Khoshravesh brothers, Hansard invites Dublin electronic musicians Dunk Murphy (Sunken Foal) and Deasy to participate in the sessions, eager to see what might spark from the diverse range of musical traditions. Each day is unwritten, defined by an openness, a willingness to follow the spirit of the moment wherever it may lead. "When you surround yourself with great musicians and do your best to keep up, stay loose, give little direction, and allow everyone to bring what they bring, something transformative may happen," Hansard says.

Over the next few months, more musicians cycle in: Graham Hopkins and Earl Harvin (drums, percussion), Michael Buckley (saxophone, horns and flute), Breanndán Ó Beaglaoich (accordion), Rosie McKenzie (violin), Aida Shahghasemi (Iranian singer and daf player), Eamon O'Leary (banjo, bouzouki, and mandolin), Anna Roberts-Gevalt, (fiddle), Brían Mac Gloinn (Ye Vagabonds, fiddle), Markéta Irglová (vocals), and Rob Moose (strings arrangements). They work with no agenda, no preconceived notion of what the sessions will turn into. But by April, it's clear that an album has emerged from this group exercise. "Sometimes," says Hansard, "when you take a small musical fragment and you care for it, follow it and build it up slowly, it can become a thing of wonder."

The resulting album, This Wild Willing (April 12, ANTI- Records), is indeed a collection of wondrous things.

Those who have followed Hansard's career since his Academy Award winning turn in the film Once will have witnessed one artistic arc: the journey of a Dublin busker who cut his teeth on the greats -- Dylan, Van Morrison, Leonard Cohen -- and followed the path of the troubadour, the singer-songwriter to great effect.

But there is another thread running through Glen Hansard's musicianship. In his decades as lead singer of Irish stalwarts The Frames, rock and folk ambitions coexist with moments of strangeness, intimacy, and stillness: love songs drowning in the last fevers of the Spanish Flu ("Santa Maria"), protagonists who ponder throwing it all away and disappearing in a fugue state ("Keepsake"). And above all, the band, veering from silence to cacophony, ready to underpin soaring emotional and dynamic shifts.

This Wild Willing marks an inflection point in his career, a turning where he marries the sonic inventiveness of the best of his work in The Frames to the discipline he's found as a lyricist in his solo career.

It is an album guided and formed by the twin totems of resolve and surrender -- the resolve to see a thing through alongside a willingness to surrender, to trust in that which lies outside yourself -- the other musicians in the room, your lover, your healer, your audience.

Lead track "I'll Be You Be Me" finds Hansard weighing the risks of such vulnerability, of the giving of oneself to another. His restrained vocal belies the fury of the underlying instrumental's building storm. "I'll be you, be me and I'll be you/I'll take your truth, your lies, your secrets," he sings, negotiating the consuming potential of desire. There is danger here, but it is without rancor or ill-will -- the danger of a hare with its belly exposed. There is also a duality in the invitation: the audience is drawn in just as surely as the song's object, to the immersive world conjured by the album.

A sense of unease lingers in the mysterious "Closing Door" and "Race to the Bottom." The latter serves as a sort of diary of Hansard's residency in Paris, finding him "coughing my lungs up on the Rue des Irlandais/becoming a risk to myself" an "'X' on my back" as he wanders the city. Hansard insists, "It's more about the decline of a person or persons rather than of human kind," and yet it is hard to escape the sense that a collective worry is being tapped into, with the desecration of Joan of Arc in one memorable line echoing the more recent destruction of the statue of Marianne -- that other great symbol of France -- in the unrest that beset the country in the winter of 2018. It is lyric as prognostication, somehow in tune with coming shockwaves.

It isn't all darkness, however. "Don't Settle," one of the few tracks not recorded in France, retains the raw energy of the various tour sound checks which brought it to life. It offers not warning, but guidance, as it considers paths of original artistic voices -- Shane McGowan, Lisa O'Neill, Woody Guthrie, and James Baldwin to name a few -- and implores younger artists to stay the course. It finds its conclusion on the record's penultimate track, "Good Life of Song," summing up the possibility inherent in the bardic path. For Hansard "there's joy and sorrow for me in this recording, where they meet is a hallowed spot." Alongside these is a trio of songs: "Brother's Keeper," "Mary," and, "Threading Water," each of which is presented so openly that it is easy forget that they are exploring private, intimate territory rarely seen in Hansard's lyrics. Here is Hansard at home in Ireland, rambling through October, preparing for winter. Here is a declaration of love, a poem put to song. Here is simple gratitude for a good life.

The album ends with the deceptively simple, "Leave a Light..." Lingering in the melody is the memory of a journey undertaken with friends, those living and those who have sailed on. And in the lyric is a path out, from disorder and discord, into the place where surrender and resolve meet. "So, say goodbye to the long, cold winter," Hansard sings, "And farewell to all we've left behind. Leave a light on and come out of the shadows. You're the one I'll come back to find."