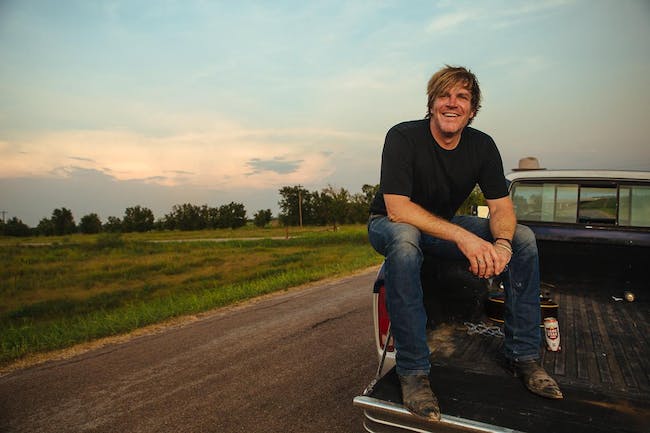 When Jack Ingram won the 2008 Academy of Country Music award for “Best New Male Vocalist,” thousands of people in the audience had to be smiling to themselves about that whole “new” thing. They knew the thirty-something, steel-eyed veteran accepting that trophy on that stage in Vegas had been rocking roadhouses, theaters and stadiums relentlessly since 1997, that he’d been celebrated by critics and fans of hard-core country music for more than a decade, and that as a Texas-born songwriter and performer, he’d been on the short list of next generation artists who could fill the boots of Lone Star legends like Willie and Waylon and the boys.

But the award did mean that Ingram, after trials and setbacks that would have buckled other artists, had at last matched the commercial success he’d always wanted with the integrity on which he’d always insisted. So he told the crowd with no small measure of pride and triumph that night that “big dreams and high hopes” can come true.

Now, as if to validate and amplify that truth, Ingram remains in the forefront of country music with the album Big Dreams & High Hopes, the seventh studio disc of his career and his third for Nashville maverick indie label Big Machine Records. Its eleven tracks range through the many facets of Ingram’s unique take on country music and songwriting. There’s the textured and contemplative “Seeing Stars” sung in ethereal tandem with Patty Griffin. You’ll find a couple of superb roots rocking country songs Jack wrote with compadre and mentor Radney Foster. And you’ve probably already heard the swimming hole party anthem “Barefoot and Crazy” which quickly became a radio smash and a soundtrack for the hot summer of 2009.

Ingram says the album’s intimate title track came from a conversation “about lasting through a bunch of BS and finding success at the time I did. At one point I said, ‘Well, I had my guitar and big dreams and high hopes,’ and that just kind of rung a bell. The song that came out of that basically talks about having this wanderlust to go out and take my music on the road like my heroes did – dreaming about it and chasing it down.”

That journey began in Houston, Texas, where Ingram grew up. His first stage experience came not through music but a drama class he took to fulfill a requirement his senior year of high school. It wasn’t his calling, but it was a rush.

“All of a sudden there was this pressure and this element of having to deliver right now in front of a crowd, and if you don’t you fall on your ass,” he says. “And that got me.” During college at Southern Methodist University, he applied that challenge to music for the first time, starting at an open mic night with two Willie Nelson songs learned out of a song book and one original tune.

It didn’t take long for the charismatic Ingram and his Beat Up Ford Band to pack the bars of Dallas and Houston, but he was acutely aware that having come of age idolizing icons like Billy Joe Shaver, Jerry Jeff Walker, Guy Clark and Robert Earl Keen, that he had a lot of learning and growing to do.

“I knew what I was doing was not sounding the way it was sounding in my head, so I was very unsatisfied,” Ingram remembers. “My heroes were the best.”

So with his vision clearly set, Ingram gradually built a reputation as a smart songwriter and a can’t-miss live performer. Nashville’s Rising Tide label signed him, re-issuing his first two independent albums, a live disc, and 1997’s Livin’ or Dyin’. When Rising Tide went out of business, Ingram found a home at Sony’s boutique Lucky Dog label, where, in what became something of a pattern, he was admired by music writers and country connoisseurs but he struggled to connect on country radio. He also felt unfairly typecast as a member of an “insurgent” country movement.

“Coming from Texas and me trying to have my own identity may have come off as anti-establishment or Texas versus Nashville. But that was a misconception. I wanted to be right where I am right now. Twenty in the game, on the big stage.”

But things had to get worse before they got better.

“I lost my record deal with Sony,” he says. “I lost a management deal. I was in this place where I didn’t know what was going to happen. I had a kid who was one year old. I really didn’t have a career to speak of at the time.”

And from that difficult place, he wrote “In The Corner,” one of the best songs of his career, an “open letter” he calls it now, to a music industry where he’d sought only support in being who he was rather than someone he wasn’t.

We get them all the time.

If he just knew how to channel

All that anger he’d be fine”.

Knowing I could make you happy for a minute with a lie.

The song is the final track on Big Dreams & High Hopes, and those lyrics make what happened next all the more remarkable. Jack Ingram met Scott Borchetta, a veteran country record promoter who’d launched his own label Big Machine Records. In an industry and genre where outsider labels have had an almost impossible time building hit-making careers, Big Machine took a chance on Jack, and equally Jack took a chance on one of those independent label. The new label worked with more dedication and patience than Ingram had ever seen to find the song that would break through. It was “Wherever You Are,” the first single of his career to reach Number One.

“I spent YEARS trying to figure out what I was doing wrong,” says Ingram. “Why is this not working? How do I need to change? And finally you get with the right people, and you go, ‘I don’t need to change anything. I just need to show up and do the job.’ All I had to do was be myself.”

The album Wherever You Are, a mostly live project, was followed by 2008’s This Is It and now Big Dreams & High Hopes. Already the new album has produced the top twenty single “That’s A Man.” And “Barefoot and Crazy” appears poised for a whole lot more airplay. But this is far more than a repository of a few hit singles. The album kicks off with “Free,” a breezy and uplifting embrace of the finer non-material things in life. Ingram worked with Jeffrey Steele and Tom Hambridge to write the swaying and satisfying “Not Giving Up On Me” with its large chorus drenched with steel guitar and gratitude to a supportive lover. And people will surely talk about Ingram’s intense, refreshed version of “Barbie Doll,” probably the most popular song from his live show, recorded here in a fantastic, wise-ass duet with Dierks Bentley.

In a time when the music industry tries so hard to jam new artists up to the top of the charts before they’re ready, only to so often see them plummet back to earth, Ingram’s rise has been slow and steady, fueled by dreams and hopes for sure, but more substantially by high standards and the ambition for a career measured in decades and influence rather than chart position. He’s in the best place he’s ever been and it’s clear from a few listens to Big Dreams & High Hopes that confidence is bolstering his artistry.