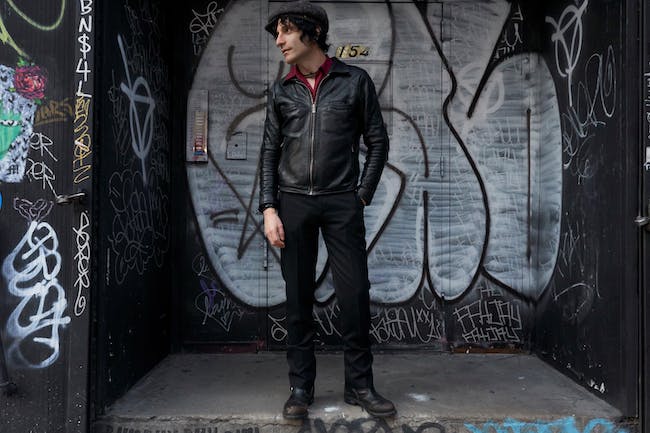 Diane and the gentleman, Amanda Cross

Jesse Malin— whom the London Times says “writes vivid songs with killer tunes and sings them with scary conviction”— and Lucinda Williams— the southern troubadour once named “America’s best songwriter” by Time magazine— first met in the early 2000s at a jazz club in NYC’s West Village. In a joint 2017 Rolling Stone interview, the two discussed their “shared love of miscreants, misfits, the misunderstood and the mysteries of everyday lives binds them across the Mason-Dixon line.” “From the early frontier days of hardcore in New York to all the punk rock and singer/songwriter touring,” says Malin, “it’s all been about survival and reinvention. I wanted to make an open-sounding record with the space to tell these stories. I like to write about characters and people I meet along the way. The dreamers, schemers, hustlers, romantics, lovers, leavers and believers.” Many of the dreamers, schemers and so on from Jesse’s own life contribute to Sunset Kids, his new album of highly personal songsbeing released August 30 on Wicked Cool Records. Sunset Kids first took shape at The Hollywood Bowl, when Jesse accepted Lucinda’s invitation to see her open for what turned out to be Tom Petty and The Heartbreakers’ final concert.The bittersweet experience inspired one of the new album’s highlights, “Shining Down,” a rainy day jangle about “keeping alive the spirits of the ones we’ve lost.” During that same visit, the idea came about of three-time Grammy-winning Lucinda producing Jesse’s next record. “Lucinda has a great eye for finding the beauty in broken things and a knack for always picking the right take. Once she started dancing in the control room, we knew we had it.” In addition to this rare turn in the producer’s chair for Williams, she co-wrote and sang on the evocative Country-flavored “Room 13,” which Malin calls “the heart of the record in a lot of ways, about those meditative moments far away from home, where you’re forced to reflect on the things that really matter.” The album also features “Chemical Heart,” an upbeat pop basher located at a mythical point on Queens Boulevard where Paul Simon and The Ramones intersect, name checking Bernie Taupin and Jake LaMotta among others. “Shane” is a gentle ballad about one of his heroes, the lovably shambolic Shane MacGowanof The Pogues. “My first album, The Fine Art Of Self-Destruction, was about finding glory in the wreckage,” says Malin of the album which was upon release Uncut’s “Album of the Month.” “Sunset Kidsis about owning it. The failures, the victories, the moments. And moving up from there.” After reflecting on his life while walking the streets of London, jamming riffs in an East Village basement and writing songs in Florida hotel rooms while visiting his ailing father, the ambitious 14-song album was recorded on both coasts between the two artists’ touring schedules. It opens with the pre-apocalyptic confession “Meet Me At The End Of The World Again,” which includes backing vocals by Malin confidante and collaborator Joseph Arthur. Another key guest contribution comes courtesy of Green Day’s Billie Joe Armstrong, who co-wrote and sang on “Strangers & Thieves.” “Billie Joe was in town and I showed him where we hung out when we were kids in the hardcore days,” Malin recalls. “A couple days later, I got a text and he had finished the song. He went into the details of his experience in the Bay Area with that scene, and also my experiences, which were very parallel in New York.” Those early days found a young Jesse “riding the subway trains from Queens to the record stores and nightclubs in dirty, pre-Disney New York City” and never looking back. His band Heart Attack put out the first New York hardcore single “God Is Dead” when Malin was 14 years old. He later went on to acclaim as the frontman for the fast and loud D Generation, whose albums were produced by Ric Ocasek, Tony Visconti and David Bianco. Bianco is one of the Sunset Kids referenced in the album’s title. The engineer who won a Grammy for his pristine sonics on Tom Petty’s Wildflowers and produced the first major-label release of Jesse’s career passed away suddenly after overseeing the initial sessions for Sunset Kids in his L.A. studio. “Playing music is something I need to do. Singing under those hot lights every night is a great exorcism. We get to put together this pirate ship of characters and go around the world making trouble and singing our guts out." As the line in crucial cut “When You’re Young” says, “Don’t waste your life on things that don’t get better.” Malin concludes: “It’s about finding ways to survive and navigate through all this stuff. Being compassionate and loving in a world that will break your heart. But you’re still here. You wake up again and put one foot in front of the other and live every day like it could be your last.”

Amanda Cross is a singer/songwriter from Oklahoma City, OK. After moving to New York City, Amanda quickly found herself performing and touring as a backup singer/dancer with Trans-Siberian Orchestra and then later with Chromeo. She has shared the stage with artists such as Billy Joe Armstrong (Green Day), Clem Burke (Blondie), David Immergluck (Counting Crows) and many more. Her debut single “How Did I Get Here” is available now.

Diane and The Gentleman

The recession of 2008 was a transforming time for Diane Gentile. “When one is out of work and the bills aren’t being met, and album sales are no longer a reliable income stream and traditional record deals become a false reality, and your boyfriend has another girlfriend, there is no alternative but to transform. I went into deep debt and at the same time, I sat home and wrote 40 songs.” These 40 songs led Diane to Velvet Elk Recording Studio in PA with producer Don Dilego (Hollis Brown, Jesse Malin) who helped her record her first official solo album titled Caught In A Wave. The video of the single “Happy” was directed by Dave Stekert at Jones Beach West End with some dear friends of Diane’s lending their artistic input and support.

After self-releasing Caught in a Wave through CD Baby, Diane embarked on an acoustic tour of the U.K. She returned to NY and began working late nights at a local music venue downtown, spending many hours there listening to every kind of band perform. "Suddenly I saw before me, my new group." This is how Diane and The Gentle Men came to be.

“The A-side, ‘Motorcycle’ came about when strumming a warn-in ’57 Gibson, dreaming about taking a trip with one of the new local rockers who carried himself like Marlon Brando in The Wild Ones.” “Motorcycle” was mixed by Cliff Norel, (R.E.M., The Replacements, Bruce Springsteen). “Motorcycle” was chosen as “Coolest Song in the World” by Little Steven for Little Steven’s Underground Garage on Sirius Satellite Radio. The video, directed by Bill Moulton, has over 10,000 views on You Tube

With this first official release and consequent success of “Motorcycle”, Diane and the Gentle Men began opening for acclaimed artists: Richard Lloyd (Television), Steve Wynn, Jesse Malin, Tommy Stinson (the Replacements), Laura Cantrell, Alejandro Escovedo, etc. She has guest appeared for the Lou Reed yearly Birthday concert at Bowery Electric as well as the Positive Panther Benefit at NY’s Bowery Ballroom. She opened the Suicide Tribute show at The Bowery Electric with Mr. Pharmacist, aka Gregg Foreman (The Cat Power Band) among an incredible line-up that included Ric Ocasek of the Cars, Jim Sclavunos (The Bad Seeds), and more. Diane performed on the Johnny Thunder’s tribute shows and was a guest singer for the Marc Bolan T-Rex Anniversary sold out shows at the City Winery in NYC with Tony Shanahan (Patti Smith band), Suzanne Vega, Angela McCluskey and more. New York Music Daily wrote “Diane Gentile is sort of a younger New York counterpart to the Motels’ Martha Davis. She puts her own individualistic spin on the dark side of propulsive 80s new wave sounds, and her band is killer.” Diane was invited to appear at Adam Duritz’s (The Counting Crows) home to play 3 songs as part of the Underwater Sunshine Festival Podcast.

In June 2018 Diane and The Gentle Men, went into G Studios in Brooklyn with Jesse Malin and engineer Brian Thorn and put down basic tracks for a full album. This was on the heels of her brother Eddie’s passing. Then shortly thereafter, her best friend and sister Elda Stiletto, a NY cult rocker of the famed 1970’s indie band the Stilettos (with Debbie Harry and Chris Stein of Blondie) unexpectedly died. Diane then left for Italy to play a few dates, thinking the escape would be a good distraction from the sadness and instead, landed in the Maggiore Trauma Center in Bologna for 30 days after being hit in the face with a rock that had ricocheted off the highway through the front glass windshield breaking all her facial bones, ripping her eye and causing her other severe face and mouth injuries. While recuperating from surgeries, she decided to release a 4 song vinyl EP called “Little Things” as well as release the video of “Little Things” which RollingStone.com featured in it’s TOP 10 of the week of August 20th: “Little Things is a propulsive pop-rocker built for open roads and unbroken horizons.” The video was again directed by Dave Stekert, with the same close friends providing input and support and this time, edited by Jason Yantz with hair and makeup by Heart Montalbano.

The “Little Things” EP is a double A side vinyl (also available for download). The title track is a song inspired by the inner search for what matters in this life. Track 2 “Joe” is a melancholy song about a boundless person incapable of committing to a relationship. “Perfect People” is a rocker about observations of the human spirit and it’s countless imperfections. “Second Hand Heart” is a ballad inspired by the passing of Ed, who was known as “Fast Eddie Gentile” by his few remaining friends who knew him as a great guitarist, prior to his devastating downward spiral into drugs and poverty.

When asked about her writing Diane says “lyric and melody are tied. They sort of need to be in love with each other for the song to work properly. I have still been trying to write that song that makes you wet, like a great Roxy Music after dark track. I am a romantic at heart.”

The band, Diane and the Gentlemen is still Jason Victor (Dream Syndicate/Skull Practitioners/ Matthew Sweet/Alejandro Escovedo and others), Matt Basile on bass, (current engineer/producer at his studio Proper Pop) and Colin Brooks, longtime Sam I Am drummer who also plays in the Hurricane Bells. Special guests on the EP include Mr. Pharmacist on keys and Mark Bosch (of Mott The Hoopla) who added guitar on “Little Things” and “Perfect People”. The songs on the EP are mixed by Geoff Sanoff. Jesse Malin produced “Little Things” and “Second Hand Heart”.

Diane Gentile has upcoming dates at the 30A Songwriter Festival in January 2020, an upcoming Oct/Nov 2019 tour supporting Jesse Malin and Joseph Arthur. Diane will appear at Bowery Ballroom in December for a benefit concert (celebration of songs on the Clash’s London Calling).

Most recently on July 31st, some of Diane’s friends got together in NY’s Lola to sing her songs for the “Little Things” EP release show with her band The Gentlemen. Helping her get back up on stage were some of her comrades Lenny Kaye (Patti Smith Band), Steve Wynn (Dream Syndicate), Jesse Malin, Felice Rosser of Faith NYC, and others. She will be touring in support of the EP with Jesse Malin and Joseph Arthur in the fall of 2019.