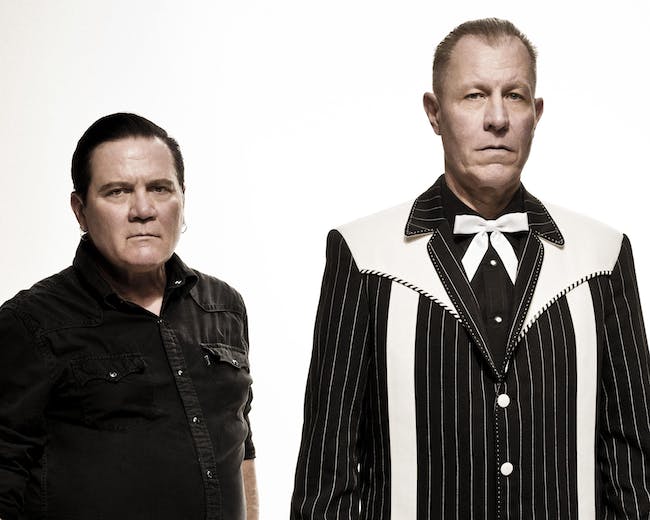 By day, Jim Heath is a mild-mannered musical historian well-versed in the birthing days of rock and roll. But when the sun goes down, he straps on his signature Gretsch 6120, steps up to the mike and is transformed into REVEREND HORTON HEAT, a hellfire-spewing, rock and roll dare-demon.

Jim’s tome is iconic: From recording with Lemmy Kilmister, being revered by country music legends like Johnny Cash, Carl Perkins and Screamin’ Jay Hawkins, touring with Soundgarden, ZZ Top, The Cramps, Social Distortion, White Zombie and the Sex Pistols (a young Lydon was connected to Jim’s original 1985 demo), to providing touring opps to upstarts Kyuss, Hank III, Marilyn Manson and countless others across decades on the road.

Heath and longtime confidant and slap-bass general Jimbo Wallace have polished up their 12threlease, Whole New Life, which Heath calls “the most positive material I have ever written. It focuses heavily on rock and roll but there is a human interest parallel - songs about growing up poor, vices, marriage, having children and walking the rapturous streets of America.”

Call it a new twist on an old sound, Whole New Life was recorded between Fun Guy Studios and Modern Electric in the band’s hometown of Dallas. The eleven track rumination features new sticksman Arjuna ‘RJ’ Contreras. The Texas based jazz pupil came to the bands attention from a friend’s reference in the summer of 2017, and brought a whole new backbeat to the legendary rockabilly administration. After clicking with Contreras, Heath hired a new pianist in 2018, Matt Jordan, to flesh out the sound with the pomp and power of Jerry Lee Lewis and Little Richard. “I love playing with these guys, it truly is a whole new band, so the title fits perfectly.”

Recording the album, Heath recalled that “Back in the 1950’s, reverb chambers were really hip and I always loved their warmth. I’m all about Sam Phillips and the things he did with tape machines and tape echo. I love that kind of production value, even if it is older than me! It really sent me to this whole other headspace where I worked with a lot of vintage gear on this album - some of which I built myself for a truly unique sound - ribbon, old tube microphones, pre-amps and stuff. Additionally, a year before I started piecing this together I worked especially hard on my singing voice. Whole New Life brought out something in me where I am screaming more and making more throaty sounds. It's got some Louisiana feel to it, a bit of gruff and some Roy Orbison style in it. We tested out new tracks on our most recent tour and they are working better with the audience than any new songs we premiered since the early days of the band.”

“This tour started around 1986,” Heath chuckles dryly. REVEREND HORTON HEAT still performs nearly 200 shows annually, including their trademark Horton’s Hayride Festival in Southern California, which has expanded to an end-of-the-year jamboree under the name Horton’s Holiday Hayride. The band has also wowed sold-out crowds with their multi-city residencies across America, including performances at Coachella, Reading, Austin City Limits, Riot Fest and countless other festivals. The Texas troubadours also took a unique approach to the term ‘Special Guests’ on recent tours. Recalling the time the band opened for Jerry Lee Lewis, Heath had a vision, “The idea of playing in Jerry’s backing band would have been pretty neat. So every once in a while we’ll have a load of fun putting that aspect in our live set. In the middle of our set, we’ll have a special guest come on stage for a mini-set where REVEREND HORTON HEAT is the backing band. The first time we did it was with Lemmy Kilmister. We stopped our set midway, the road crew dragged a Marshall amp on stage, wiped the Rickenbacker clean and out came Lem. He was adamant on playing deep cuts, but I fought tooth and nail with him to do ‘Ace Of Spades.’ I told him, ‘Lemmy, we must do this song, we have to give the people want they want.’ He took a drag of his smoke, looked me square in the eye, and said ‘Never give them what they want, give them what they need!’”

With over 1 million albums sold and nearly 35 years in the game, Heath and company have been delivering blood-pressure inducing scriptures to millions of fans worldwide. Call it rock and roll, psychobilly or what have you, REVEREND HORTON HEAT is often considered an early architect of the latter genre (at least on this side of the Atlantic) and occupies a peculiar place in American musical terrain.