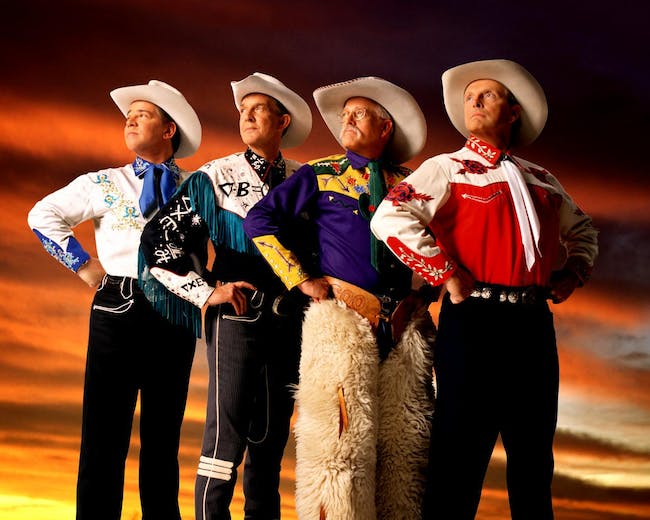 Riders In The Sky

iCal
Google
Riders In The Sky and The Quebe Sisters Perform Historic Tower Theatre in Oklahoma City on December 15.

RIDERS IN THE SKY

Riders In The Sky are truly exceptional. By definition, empirical data, and critical acclaim, they stand "hats & shoulders" above the rest of the purveyors of C & W - "Comedy & Western!"For more than thirty years Riders In The Sky have been keepers of the flame passed on by the Sons of the Pioneers, Gene Autry and Roy Rogers, reviving and revitalizing the genre. And while remaining true to the integrity of Western music, they have themselves become modern-day icons by branding the genre with their own legendary wacky humor and way-out Western wit, and all along encouraging buckaroos and buckarettes to live life "The Cowboy Way!"Riders In The Sky are exceptional not just in the sense that their music is of superlative standards (they are the ONLY exclusively Western artist to have won a Grammy, and Riders have won two), but by the fact that their accomplishments are an exception to the rule as well.

That Riders In The Sky was even formed is a feat of improbable likelihood. What are the odds that a theoretical plasma physicist, a wildlife manager - galvanizer - Life Scout, an English major - shot putter - Bluegrass Boy, and a Polka Hall of Fame member would collectively become "America's Favorite Cowboys?" And even more unlikely is that 30-plus years later, the original members are still "bringing good beef to hungry people" while putting up Ripken-like numbers! The Rolling Stones only made it a few years before replacing Brian Jones; the Sons of the Pioneers constantly changed personnel; even the Ringo-era Beatles only lasted 8 years. (Perhaps Too Slim, as a sophomore writer for the University of Michigan Daily, had an ulterior motive in 1969 by propagating the rumor that Paul McCartney was dead! It's true... go ahead and Google "Paul is dead rumor"...) But the key to keeping the same founding members intact for three decades on the road is more easily explained: "Separate hotel rooms," cracks Ranger Doug!

Riders In The Sky's first official public performance was Nov. 11, 1977, at the erstwhile Nashville nightspot "Phranks & Steins." Taking the stage that night for a crowd of eight or nine (counting Herr Harry behind the bar) were Ranger Doug (Idol of American Youth) on arch-top guitar and baritone vocals, and Too Slim (A Man Aging Like Fine Cheese) on bunkhouse bass, face, and tenor vocals. A chain saw may have been in the mix somewhere that night, but was soon retired. Replacing the chain saw was Woody Paul (King of the Cowboy Fiddlers) on fiddle, tenor vocals and rope tricks, and the launch was successful! They subsequently added the "Stomach Steinway" stylings of Joey the Cowpolka King on accordion and baritone vocals, much to the delight of 'Polkaholics' everywhere.

As a classic cowboy quartet, the trail has led them to heights they could have never predicted. Riders have chalked up over 6100 concert appearances in all 50 states and 10 countries, appearing in venues everywhere from the Nashville National Guard Armory to Carnegie Hall, and from county fairs to the Hollywood Bowl. Their cowboy charisma and comedic flair made them naturals for TV, and landed them their own weekly show on TNN, as well as a Saturday morning series on CBS. They have been guests on countless TV specials, documentaries and variety shows, appearing with everyone from Barney to Penn & Teller. And their animated likenesses have shared the screen with Daffy Duck on the Cartoon Network, and the Disney Channel's Stanley. If you consider their compositional credits, one might call them "Writers In The Sky!" In addition to penning award winning songs for their own albums, they wrote the score for Pixar Animation's 2002 Academy Award-winning short "For the Birds." They composed the theme song for the internet cartoon show "Thomas Timberwolf" by renowned Bugs Bunny creator Chuck Jones. But the animated character that history will most certainly link to Riders In The Sky is the loveable cowboy Woody, as Riders performed "Woody's Round Up" in "Toy Story 2," with the album of the same name garnering Riders their first Grammy Award in 2001 for "Best Musical Album for Children." Two years later, Riders roped their second Grammy in the same category, for "Monsters Inc. - Scream Factory Favorites," the companion CD to Pixar's award winning movie.

Equally as exceptional, but of greater significance, is that in 1982, Riders In The Sky became the first, and to date only, exclusively Western music artist to join the Grand Ole Opry, the longest running radio show in history, and thus began a love affair with radio as well. In 1988, they recorded comedy skits for the album "Riders Radio Theatre" and launched the long-running international weekly radio show of the same name on public radio. And keeping pace with the ever-changing technological landscape, in 2006 "Ranger Doug's Classic Cowboy Corral" debuted on XM Satellite Radio, still heard weekly on SiriusXM Channel 56.

Exceptional artists also appeal to a diverse and broad-based cross section of their adoring public. Riders In The Sky's music and comedy delights cowboys and cowgirls of all ages, and from all walks of life. Riders are equally at ease amusing a theatre full of children as they are enthralling a symphony audience accompanied by 50 or 60 classically trained instrumentalists, or even an NCO club full of servicemen during a USO Tour. Riders have performed at the White House for both Democratic and Republican administrations, and at Major League Baseball's winter meetings for both American and National Leagues (although with an admitted bias for the Detroit Tigers). With their ability to persuade cowpokes on both sides of the fence to set aside their differences for a brief escape from day-to-day tribulations, is it any wonder that Riders have a virtual home called "Harmony Ranch?"

Ultimately, exceptional careers do not go unnoticed, and throughout theirs, Riders In The Sky have been honored regularly. In addition to being inducted into the Grand Ole Opry, Riders are in the Western Music Association's Hall of Fame, the Country Music Foundation's Walkway of Stars, and the Walk of Western Stars (in Newhall, CA near Melody Ranch Studios) along with Gene, Roy, John Wayne and other cowboy legends. No less important than their two Grammies, Riders have been the Western Music Associaton's "Entertainers Of the Year" seven times, and won "Traditional Group of the Year" and "Traditional Album of the Year" multiple times. The Academy of Western Artists has named them "Western Music Group of the Year" twice in 5 years, and the National Cowboy & Western Heritage Museum has bestowed Riders with their Wrangler Award statuette three times. It comes as no surprise then that Billboard magazine's Jim Bessman counts them as one of "the most historically significant acts in the history of American music."

Yes, it would be "The Easy Way" to call it a career after 30-plus years, but it wouldn't be..."The Cowboy Way!" And so, the never-ending trail drive continues. The ponies are rested and watered, and America's Favorite Cowboys are ready to saddle up and ride, bringing good beef to hungry people wherever they may be. Yes, Riders In The Sky are truly an exception to the rule.

With over fifteen years of touring to date, The Quebe Sisters have delivered their authentic triple fiddle and three-part harmony sound to the concert halls and festivals of North America, Europe, and Russia.

“We differentiate our music as ‘Progressive Western Swing’ from simply ‘Western Swing’ because we aren’t trying to sound just like Bob Wills,” Grace Quebe explains. “Instead, we continue his vision, playing the style he pioneered in an authentic way by incorporating new genres and songs, interpreting them using our own unique voice through Country instrumentation.”

The band’s stripped-down acoustic instrumentation breathes new life into seasoned sounds once found in Texas dance halls and honky-tonks. Grace continues, “To us, preserving the tradition of Western Swing isn’t about keeping something alive like a relic. Western Swing has always been about innovation.”

Innovation has led the sisters to channel the musical connection between danceability and emotiveness, combining old sounds with new feelings and old feelings with new sounds. It’s not nostalgia that drives the band as purveyors of Western Swing, but the aspiration to take the music back to its roots and sustain the spirit of Swing.

Combine the musical stylings of The Mills Brothers, Ray Price, Count Basie, Willie Nelson, and you have none other than The Quebe Sisters.