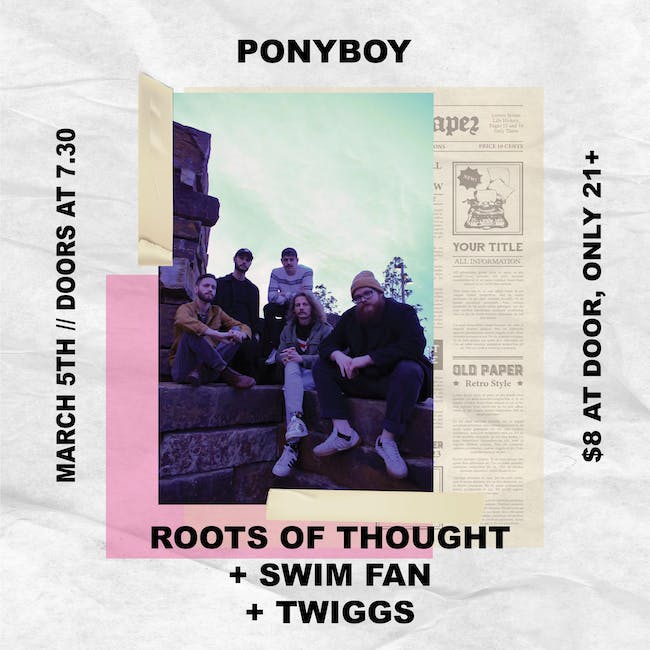 Based out of Tulsa, Oklahoma, five-piece indie psyche pop band, Roots of Thought is built on a blend of old and new, weaving in and out of sounds inspired by The Doors, Alt-j, Pink Floyd, and Arctic Monkeys to name a few. Frontman Tazmen West and guitarist Logan Meldrum met as high school seniors, brought together by lifelong vision of music. Meldrum and drummer Gavin Wendland had begun their musical adventures four years prior and were on the lookout for a vocalist. After writing a few songs together, they started playing their first shows around Tulsa, eager to share their new music, at house shows and dive bars. Later that year, they recruited bassist Tyler Burke, a childhood friend of West's. Through word of mouth, a series of demo releases, and relentless performances, the band gained much of their local acclaim and continued to grow their fan base over the next few years. They recorded their debut LP, Parallel Self, released at the Historic Cain’s Ballroom in 2015. After undergoing a small change in members, the band sought out to capture their new sound with EP Familiar Feelings, at The Closet Studios with the locally renowned engineer, Kendall Osborne in July of 2016, releasing it in February of the following year for a sold-out venue. Picking up keyboardist, Jason Bauer they set off on their first tour in 2017. After a year of writing and spending a little time in the studio, they released their shadowy and haunting new single, “Powdered Donut” in April, 2018. Since then the band has been playing shows at festivals (SXSW official artist 2019), locally (venues like Tulsa’s own Gathering Place and Historic Cain’s Ballroom) and in surrounding states, writing new music, and carefully planning their next release.​