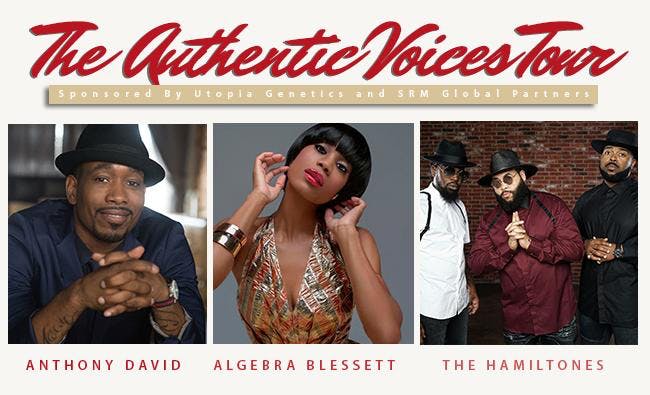 After writing a song for India.Arie's breakthrough debut album in 2001, Anthony David Harrington became a noted soul-rooted R&B artist in his own right, known for his slightly rasping baritone and down-to-earth storytelling. Seemingly inspired in equal measure by R&B legend Bill Withers and folk-soul cult hero Terry Callier, Harrington released a pair of modest independent albums prior to having them condensed and anthologized for Acey Deucy (2008), which led to a Grammy nomination for "Words," a duet with Arie that also helped put the album in the Top 30 of Billboard's R&B/hip-hop chart. Harrington has continued to record refined albums in a blue-collar singer/songwriter mode for eOne and Shanachie, including the charting releases As Above So Below (2011) and Love Out Loud (2012), as well as the Withers tribute Hello Like Before (2018).

Originally from Savannah, Georgia, Anthony David Harrington started writing songs during the Gulf War, while stationed in Iraq as a paratrooper. After he returned to the U.S., the veteran moved from his hometown to Atlanta for the sake of deepening his involvement with music. Shortly after getting settled, he struck up a friendship with India.Arie, briefly working as her artist manager and writing "Part of My Life" for Acoustic Soul, her multi-platinum, Grammy-nominated 2001 debut. After he warmed to the idea of being a performer rather than just a songwriter, Harrington hooked up with the local Brash label, which released 3 Chords & the Truth in 2004 and The Red Clay Chronicles in 2006. Selections from those two albums were combined in 2008 for Acey Duecy, issued through Arie's Universal Republic-affiliated Soulbird label. The album reached number 30 on Billboard's Hot R&B/Hip-Hop Albums chart, and "Words," a duet with Arie, was nominated for a Grammy in the category of Best R&B Performance by a Duo or Group with Vocals.

The next decade, Harrington switched to the eOne label, which in 2011 released As Above So Below, featuring the Enchantment-inspired Top 20 R&B/Hip-Hop hit "4evermore," a duet with Algebra Blessett. The compilation #LocationLocationLocation, consisting of remixes, previously unreleased cuts, and live acoustic performances, was also out by the end of the year. Love Out Loud, containing another duet with Blessett, followed in 2012 and became Harrington's third proper studio album to chart. After a break from the studio and a move to Shanachie, a haven for veteran R&B artists, Harrington made up for lost time in 2016 with The Powerful Now, and followed it in 2018 with Hello Like Before: The Songs of Bill Withers. ~ Andy Kellman, Rovi

The career of Atlanta, Georgia R&B singer and songwriter Algebra Blessett began to take shape with background vocal credits on a pair of 1998 releases: the remix version of KP & Envyi's "Swing My Way" (which appeared on the soundtrack of Can't Hardly Wait) and Babydoll's EastWest single "Don't Wanna Lose Your Love." Involvement with albums by India.Arie (Voyage to India), Debra Killings (Surrender), Miri Ben-Ari (The Hip-Hop Violinist), and Eric Roberson (...Left) preceded Purpose, her debut album, released in February 2008 on the revitalized Kedar label. Supported with production input from Carvin & Ivan, Adonis Stropshire, and Bryan-Michael Cox, it peaked at number 56 on Billboard's R&B Albums chart. Work with Anthony David, Vivian Green, and Esperanza Spalding followed throughout 2012. She released her second album, Recovery, for eOne in January 2014. ~ Andy Kellman, Rovi

J. Vito, Tony Lelo, and 2E are a trio on North Carolina natives known as The Hamiltones. The group started as background vocalist for Grammy winning soul singer Anthony Hamilton.

When their behind the scenes clips of quartet-styled cover songs were uploaded to the internet, it caught fire! Since then, The Hamiltones have been featured on The Breakfast Club, Steve Harvey Morning Show, sold out The Apollo, and have been featured on four Grammy nominated albums; including Anthony Hamilton, PJ Morton, Johnathan McReynolds, and Tori Kelly.

Although these accomplishments are impressive, to The Hamiltones, the music is more important than any accolade. Fans have patiently waited as they’ve carefully crafted the groups debut project titled “Watch The Ton3s”. The project is out now and receiving love from all ages and demographics. Michelle Williams of “Destiny Child” recently named it as one of her “Summer Must-Haves!”