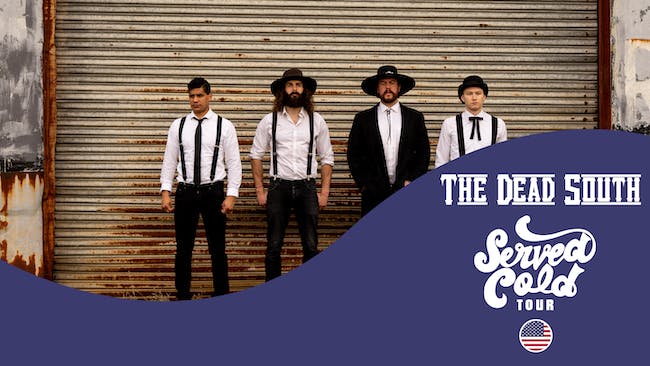 iCal
Google
The Dead South live in concert at the historic Tower Theatre in Oklahoma City with Elliot BROOD on September 12, 2021.

A rock band without a drummer, a bluegrass band without a fiddler. To the gentlemen of The Dead South, a self-styled 4-piece string band from Regina, Saskatchewan, it’s about how, not what, you play. The Dead South’s combination of cello, mandolin, guitar and banjo has all the hallmarks of a group tuned to bygone times, but The Dead South find distinctly modern bathos in this old time rigging.

On their third album, Sugar & Joy, The Dead South tell stories of desperation and bad decisions in fast-paced, brightly-laced bursts. The title, Sugar & Joy, was selected in the band’s style of pulling a lyric from their self-identified “weirdest song on the record” (in this case, the Gashlycrumb goth of “Fat Little Killer Boy”).

Sugar & Joy is the band’s first album written and recorded outside Regina. Produced by FAME Studio-trained Jimmy Nutt, a longtime member of the Muscle Shoals music scene whose recent credits include a Grammy for his work on The Steeldrivers, Sugar & Joy is The Dead South’s tightest, weirdest and most exciting studio work yet.