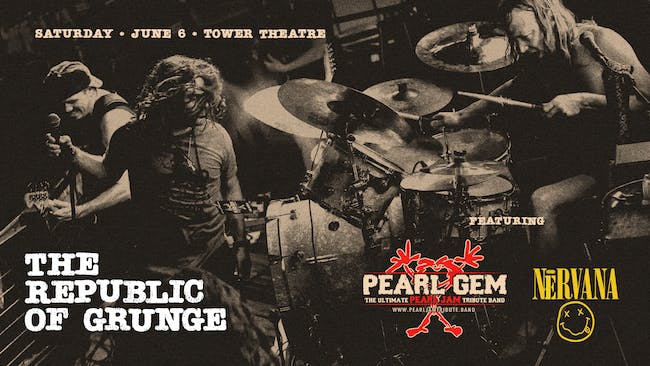 The Republic of Grunge

iCal
Google
The Republic of Grunge: Featuring Pearl Gem and Nervana at Tower Theatre in Oklahoma City on June 6.

From the corduroy jackets, combat boots, flannel shirts, and crazy hats, to the amazing sound that Pearl Jam created during the grunge revolution, Pearl Gem energetically brings it back to stage in a captivating performance. All of the favorite Pearl Jam songs are masterfully replicated such as; Jeremy, Black, Betterman, Evenflow and Alive, to name a few, through a band that spares no expense to make its audience feel like they stepped into a time warp to 1992. Pearl Gem's Eddie Vedder is a mirror image of the emotive singer, who delivers the distinctive and powerful vocal parallel through an explosive and energetic performance that includes all of Eddie's aerial antics. Pearl Gem's Mike McCready, Stone Gossard and Jeff Ament play their roles respectively and do it with meticulous detail featuring the complete look and sound through all of the expected Les Pauls, Fender Strats and precision bass guitars. The band also features an amazing drummer who duplicates the moves of Pearl Jam best, Dave Abbruzzese. Make no mistake, Pearl Gem will put you on a time machine right back to The 90's!

Nervana have been described as the most authentic reproduction of the original 3-piece to ever to take the stage. Receiving rave reviews from fans and critics alike, the trio have invaded the world with grunge-fever yet again. Nervana have toured in numerous countries for over ten years as the premier Nirvana Tribute Band. Playing festivals, established venues and featured in countless press articles and youtube videos, the band have brought a reputation that has never faltered.