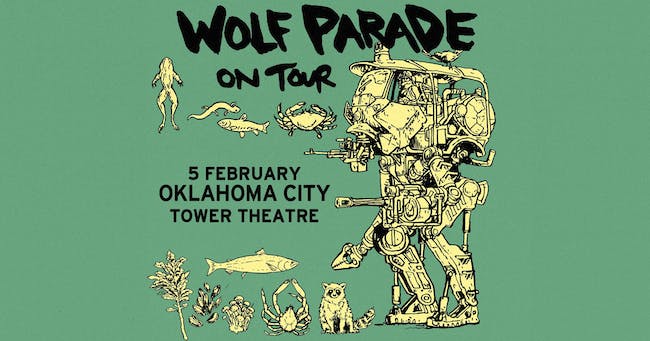 iCal
Google
Wolf Parade live in concert at Tower Theatre in Oklahoma City on February 5, 2020, with Land of Talk.

The indie rock combo Wolf Parade formed in 2003 in Montreal, where the band's first show saw them opening for Arcade Fire. From there, bandmates Dan Boeckner, Spencer Krug, Hadji Bakara, and Arlen Thompson recorded and self-released a four-song EP, followed by a six-song recording in 2004. They eventually gained the attention of songwriter Isaac Brock, who doubled as the frontman of Modest Mouse and an A&R rep for Sub Pop Records. Brock helped the band secure a deal with Sub Pop while serving as a stylistic touchstone for Wolf Parade's emerging sound, which merged indie rock with post-punk.

In July 2005, the quartet issued a self-titled EP on the label by way of introduction; the band's debut full-length, Apologies to the Queen Mary, followed in September. It was one of the fall's most anticipated releases, recorded with Brock's help and released amid a critical flurry for such Canadian bands as Broken Social Scene, the Most Serene Republic, and Stars. After considering the title Kissing the Beehive for their follow-up (ultimately dismissed for fear of copyright infringement due to a Jonathan Carroll book by the same name), Wolf Parade issued their sophomore record, At Mount Zoomer, in June 2008. Emphasizing the distinct songwriting personalities of frontmen Spencer Krug and Dan Boeckner, the album received warm reviews and just narrowly missed the Top 40.

By the end of the following year, Wolf Parade had already begun working on a third record, and Expo 86 appeared in mid-2010. The following year saw the band go on an indefinite hiatus, with Krug devoting more time to his myriad other projects, which include Moonface, Sunset Rubdown, and Swan Lake. In 2016 the band announced that they would be reforming for a series of live dates, and had been working on new music. That same year the band released a deluxe version of their 2005 debut, Apologies to the Queen Mary, which included both of their pre-Sub Pop self-titled EPs. Over a decade later, Wolf Parade entered the studio with producer John Goodmanson, and in October 2017 released their fourth album, Cry Cry Cry. ~ Johnny Loftus, Rovi